One of the biggest stories right now has to do with the prisoners at Guantanamo Bay, Cuba. According to an article in the Miami Herald, the prisoners are striking due to mistreatment by the guards.

Some examples of this mistreatment provided are the confiscation of personal items (such as Religious CDs, personal letters, blankets, and hygiene items), and disruption or disrespect during prayer times. Their books and Qur’ans have been searched for paraphernalia and their exercise times have been reduced significantly. 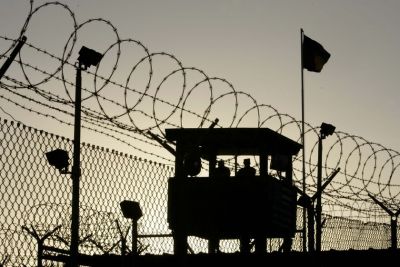 At the time of this writing, there are currently over 100 prisoners participating in the hunger strike and 30 who are being force-fed.

An attorney for some of the prisoners has described the situation as being “barbaric” and says the prisoners are being treated unfairly and that these innocent men are being denied the right to die (instead of continue to endure the conditions).

Dr. Gerald Thomson, former president of the American College of Physicians goes on to describe the force-feeding as a form of torture.

I am just trying to sum this up for any of you that aren’t already following the story. Let’s take a minute to talk about the history of force-feeding:

– In the United States, people being treated for psychiatric or eating disorders are often force-fed. When this happens, everyone just calls it sustaining life.

– Hunger strikes throughout history (all over the world) have resulted in force-feeding.

– On December 6th, 2006, the United Nations War Crimes Tribunal approved the force-feeding of Vojislav Šešelj, a Serbian politician who was being held and refusing to eat. In their statement, they said it is not “torture, inhuman or degrading treatment if there is a medical necessity to do so…and if the manner in which the detainee is force-fed is not inhuman or degrading.”

– The Connecticut Supreme Court authorized force-feeding for a prisoner who refused to eat voluntarily in the 2009 case, Lantz vs. Coleman.

– The “shoe bomber” terrorist, Richard Reid attempted to perform a hunger strike in 2009 and was force-fed.

My first reaction to this story was simple – offer them food three times a day and if they don’t eat it, that’s their problem. Then I saw the political issues behind that idea. As soon as someone died or word got out that prisoners were going hungry, there would be a public uprising.

Here is how I see it now: if someone is refusing to eat, they are probably suffering from some sort of mental issue (psychosis, an eating disorder, dementia, retardation, etc.). In that case, the only responsible thing to do would be force-feeding them. That is how the medical world treats these issues, and I stand behind their judgment.

When it comes to the confiscation of their personal items or limitation of exercise times, I have one thing to say. They are prisoners. They are there because they are either being detained or punished for their participation in terrorist activities. These aren’t purse snatchers or money launderers here – they are terrorists. Stop trying to give them rights that they don’t deserve.

Let me know what you guys think. If you are influential enough, you might change my mind (but I doubt it).

View all posts by Steve Higdon